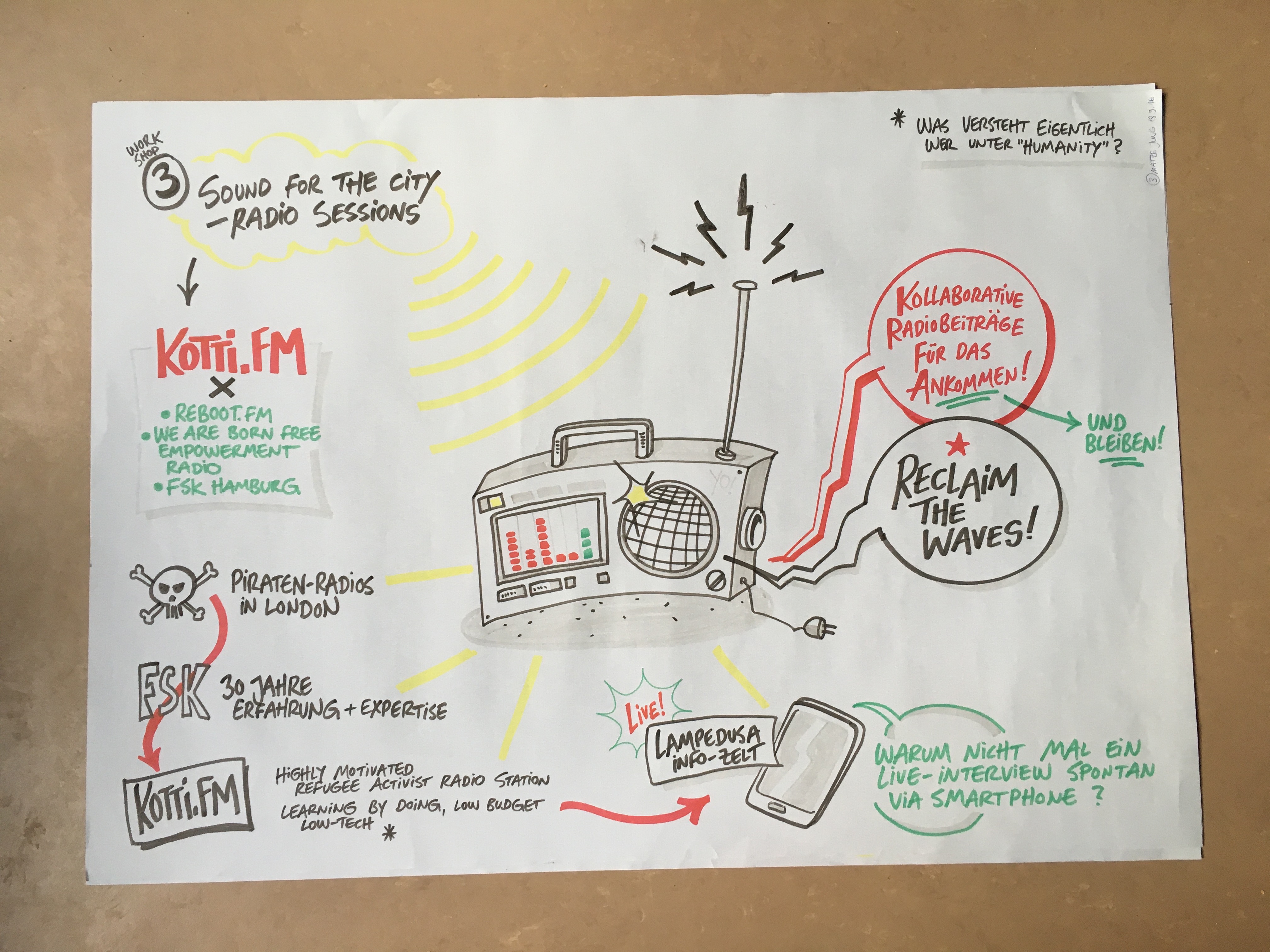 The Pirate Radio is still around

DIANA: Please describe the setup, what do you see here on the table?

MARA: There are a lot of technical devices, there is something that looks like an antenna, that is in a small grey bag.

DIANA: Okay, does it look like a dangerous technology thing, blinking lights, cables? Come on, give us more details!

MARA: Okay, I’m looking in the bag right now and I see a blue light and I see much more details than I saw before. Something silver that looks like an internet connection. And than a red light, so many lights. Looks a little bit like a miniature dark ride …

DIANA: Pit, do you want to explain, what all that stuff is?

PIT: Yes, I can shortly explain. The one part is setup by Bino brought from Berlin in basically one big rucksack. It contains a laptop, a mixer, a soundcard, couple of cables, two microphones. And from that output I go into the little recorder and from the recorder I go into a little Raspberry Pi. The Raspberry Pi gets the power from the thing that looks like a harddrive, but it’s a powerbank, enough for basically eight hours or ten. The Raspberry Pi has a USB-stick, with a blue light, the only light which is needed here. And if it’s blue it says it’s connected and when it is connected it plays, it streams. The audio signal has an icecast, an mp3 stream. It does just one thing: streaming to a specific address. It is a simple thing, but it works. The only thing, that can happen, is that you are not getting a reception or that you didn’t pay the flat rate, that you have to recharge your SIM card or the power is over, but it is quite reliable. I think we have to explain, that we use the internet quite extensively, as a kind of glue in between all this different ventures. In the end it becomes one signal on a transmitter. Our is on a roof of a friend, living on the eleventh floor in Kotti, Kottbusser Tor. He is just playing Net Radio, it picks up the stream from his neighbour WiFi. So it is an internet radio playing on FM.

KATHRIN: So you are listening now to the radio on the internet as a live stream, but also you can turn on your radio on 99.1 and listen to kotti.fm.

PIT: In a Berlin taxi we were driving to Lichtenrade, and we could listen to it basically up to the S-Bahn ring. To the South we were broadcasting very far, but to the North you have the TV tower of Alexanderplatz, which has very powerful transmitters on top. That creates a kind of electromagnetic shadow and it is difficult to broadcast through that fields.

KATHRIN: Thinking about urban space, it is interesting what kind of invisible barriers and borders are there, where the radio waves can’t get through, and what kind of possibilities are there to hack into those spaces.

PIT: There is a monopolist, former Telekom, now they have a company called Media Broadcast, and they are basically rent out 98 % of all transmitters of Berlin. So they really can set the prices. Since 2004 we worked with them a couple of times, but we also try to set up our own transmitters. It is basically an aspect of DIY, that the whole chain from the broadcast to the signal, which reaches the people, is really self-made. We use an airtime software, which is developed by friends of us. It took over 10 years until the software became stable.

DIANA: This is exactly what allows us quite easily to switch between a broadcast in Berlin and a broadcast from Hamburg to Berlin. Of course the internet helps a lot. I think the connection between analog and digital technology is important. With a pirate radio in the good old days, you would have to be directly connected to your transmitter and your studio. And when the police came along, they would locate you, because they can locate, where your transmitter is, through special devices. For pirates loosing a transmitter was never the big problem, the problem was loosing their studio setup. And that’s partly why the London pirate scene has gotten so much stronger after the internet. There are many pirate radios in London, they are part of a subculture. Music styles like Grime came out of the pirate radio scene. They are illegally using airwaves to make music happen. The technology allows people to make pirate radio in new and exciting ways.

KATHRIN: It’s good to know that pirate radio is still around. I remember times when it was very needed: In the squatting movement of Hamburg pirate radio was a very important tool to communicate and to make things public outside the mainstream media.

DIANA: Actually when we started to do radio, we did a lot of research in different models of radio and one thing that is really interesting is to see how the free radio scene developed in Germany, Austria or France, which are very different from our friends in Bologna with Radio Alice, another fantastic radio. Often the free radio scene came out of the pirate radio and the DIY culture. People did zines and their own record labels. All these self-producers did pirate radio. There are very different models, they all have their unique histories, it is very interesting to see how radio is produced, how it get financed and regulated.